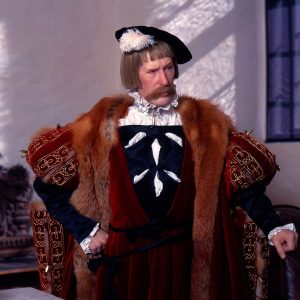 In the Sweden of today, King Gustav I may not be as much remembered as he is no doubt quite politically incorrect, however, once upon a time, not so long ago, he was regarded as the “father” of his country. He was the founding monarch of the Vasa dynasty, something of a liberator and the man who took Sweden from the Roman Catholic to the Protestant camp in the division of Christendom that was going on at the time. For this reason he is sometimes referred to as the “Henry VIII of Sweden” though, not surprisingly, such a description will anger as many as it satisfies. He was, in any event, a giant figure in Swedish history, a man who changed the course of history in Sweden and thus, to receding degrees, that of the rest of Europe as well. In the long national story of the Swedish people, King Gustav I is one of those monarchs you absolutely have to know something about. If you understand Gustav Vasa, you will know what a formidable power the Swedish nation is capable of being.-=

Gustav Eriksson Vasa was born on May 12, 1496 to Erik Johansson Vasa and his wife Cecilia in his father’s castle northeast of Stockholm. This was during the period when Sweden was, along with Norway, under the Crown of the Kingdom of Denmark at the time ruled by King Christian II. It is no coincidence that this same monarch, a formidable figure in his own right, came to be known as “Christian the Tyrant” to the Swedes. This personal union of the crowns of Denmark, Norway and Sweden, known as the Kolmar Union, had been on rather shaky ground for a while and the Swedes were becoming increasingly restive. One of the leaders of the independence movement was Gustav’s father, though he was not the primary leader. Naturally, his son Gustav supported him and supported the struggle for Swedish independence from Denmark. At one point, Gustav was captured but escaped and maintained his resistance to Danish rule.